Killer moves are another big time saver when searching. In some positions, they can have an effect as big as ordering on the transposition table move. Because killer moves are much easier to implement than a transposition table, I would advise to implement them before implementing the TT, instead of after, as I did in Rustic. (I just wanted the TT really badly because of its huge Elo-boost, and I felt particularly greedy at the time 😎)

First let's take a look at what a killer move even is.

A "killer move" is a quiet move that does not capture anything, but brings a large advantage for the side making that move. The move is so named because it is so strong that the opponent must react to it, and thus it "kills" lots of moves the opponent may have. Let's consider a simple position in which nothing much is happening, but white is a bit better. White is to move, but obviously, black is also thinking. 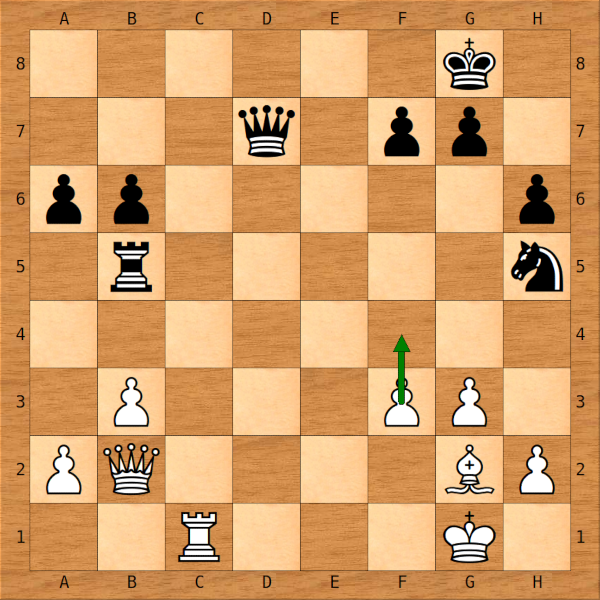 Assume black is thinking to improve the position of his knight: "My knight is on the rim. I remember from my lessons: a knight on the rim is dim. When it is my move again, I'm going to play it to f6, and then to d5. It will be in the middle of the board, where it is much more active."

However, it is white to move, and he makes the unassuming move f3-f4. If black fails to consider the change in position after the deceptively simple pawn move and blindly goes ahead with his plan of Nh5-f6, white will respond with: 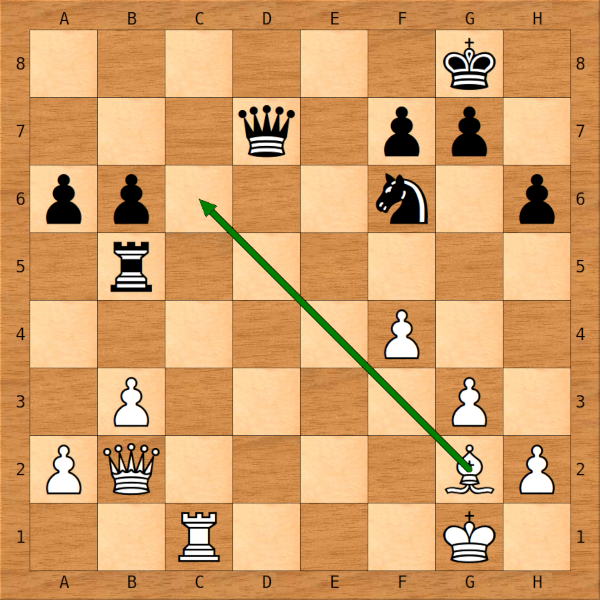 This Bishop move, which came available after f3-f4, attacks both the rook and the queen. This is the "killer move", because it "kills" all the black moves that do not take this threat into account. After f3-f4, this move is available after several moves black may play, such as Nh5-f6, or g7-g6, or a6-a5.

This is obviously a very simple position: most moves black could play are obviously not that great. The point is still the same though: the move Bg2-c6! is a good move after a variety of black moves. This can be defined as follows:

A "killer move" is a quiet, non-capturing move which can cause a beta-cutoff in different branches of the tree at the same ply.

This may not be very intuitive. A diagram will probably help to clarify. See the following diagram below:

Because of this big material gain, Nh5-f6 can't be played (it is "killed"), because it doesn't take this threat into account.

The search now assumes: "Black just played Ng5-f6 at ply 6. White's move Bg2-c6 at ply 7 is a great move. Maybe this is also good after some other moves black may play at ply 6? Let's keep this in mind. We (white) try this move first, each time it's my move at ply 7!"

This assumption is correct: the move is a good response against at least two other black moves, so it "kills" them too. In those two branches, the killer move will turn out so strong, that searching deeper is useless, because if black should allow this move without taking care of the threat, black's going to lose big time. This is called a beta cutoff.

(This is the reason why the Bg2-c6 doesn't work against Qd7-e8. After this move, black can escape from the double attack. He has thus taken care of the threat, and the killer move doesn't work. Try to find out later, how black escapes! If you can't see the solution, look at the bottom of this page.)

This is exactly the killer move heuristic does: it saves the Bg2-c6 move in a "killer move slot", so the search can try it first before other moves, in similar positions at the same ply (in this case, at ply 7 for white). Most engines have two slots. (See the sidenote at the bottom for the reason why.) When ordering the move list, the killer moves get a very high score so they are just below the MVV-LVA captures. If the captures turn out to be no good, the killer moves are the first to be tried, which greatly speeds up the search.

Now that we know what a killer move is, let's take a look at the implementation.

Rustic has an instance of a struct called SearchInfo, which contains all the information about the currently running search. The killer move slots are part of this struct:

The KillerMoves type is an array, indexed by the number of killer moves (MAX_KILLER_MOVES is 2), and the maximum depth the search can reach in ply (MAX_PLY, which is set at 125 for Alpha 3). This gives us two killer moves at each depth, which can be stored and retrieved by:

The above code retrieves the first and second killer moves for ply 7. See the sidenote at the bottom of this page why we keep two killer moves, instead of one or three or even more.

The function receives the current_move from the alpha-beta search, and the "refs" pointer to the struct that stores all the references to the information the search needs. A reference to the instance of SearchInfo is also in there.

We first get the ply count, and cast it to usize so we can use it to index arrays. Then we get the first killer, just as was shown before in the short code snippet. The if-statement is the part where we make sure the two killers are unique: if the first killer move and the one we are inserting are different, then both moves will always be different.

Ordering moves is a little bit more complicated than ordering on MVV-LVA. The score_move function needs to be extended, to take the killer moves into account. This is the score_moves function, with killer move ordering added:

There are some new parts in the function. At first, we have these two new constants:

Ordering the moves is done in this way:

First, we iterate through the move list, so we can order all the moves. This is the first for-loop:

Inside the loop we now need to distinguish between captures and non-captures. This is what the if-statement does.

If the move is a capture, it will be ordered using the MVV-LVA table just like before (see the chapter about MVV-LVA), but now, it shifts everything upward by the MVV_LVA_OFFSET.

So, we get space (values) available 'below' MVV_LVA_OFFSET.

If the move is not a capture, we try to find it in the list of killer moves. We just loop through the list as long as we are not at the end, and as long as the sort value is still 0.

(As long as the sort value is 0, the move is not yet ordered.) As soon as we match the move in the move list against a killer move, its sort value is calculated, using both MVV_LVA_OFFSET, and KILLER_VALUE (which is set to 10).

If we match the first killer at spot 0, the value will be:

Now the killers are ordered below the captures. Killer move ordering is now done, and alpha-beta will use pick_move() to pick a killer before an unordered move.

Here is the position from the start again:

White plays f3-f4, setting up the double attack threat Bg2-c6, which can be used as a killer move after various black moves. Question: Why does Bg2-c6 not work anymore as a killer move, when black plays Qd7-e8?

Solution After Qd7-e8, Bg2-c6 doesn't work as a killer move because black can escape the double attack by playing Qe8-e3+. White has to get his king out of check, for example Kg1-h1, and then black can move the rook on b5 out of danger.

Warning: Qe8-e3+ is quite a sneaky move. If white tries to to trade the queens by blocking the check with Qb2-f2, the rook on c1 becomes undefended and the black queen can capture it with another check!