To be able to play the game, the engine has to know the board layout, where all of the pieces are located throughout the game, and all relevant information about each position. In the case of Western Chess, the board and pieces are the following: 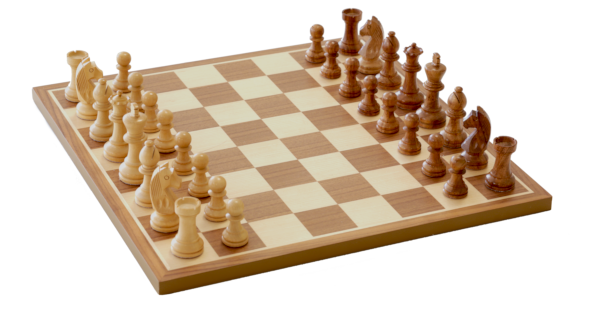 Credits: Photographed it myself using a Canon DSLR

Sidenote: Mentioning this explicitly may seem pedantic, but there are lots of different chess-like games: for example, there is Chinese Chess (XiangQi) and its cousin Korean Chess (Janggi), Japan has its own version called Shogi, which has different variants. Of course we have the ancestors of Western Chess, Shatranj and Chaturanga. If you still haven't had enough, there is Thai chess (Makruk) and even Fairy Chess with lots of different board sizes and pieces. A unique chess-like game is Arimaa, which was specifically created to be more difficult for computers than Western Chess. I'm sure I still didn't mention more than a few chess-like games, but I don't want this sidenote to occupy two screens.

And... for all of these games, engines have been written. Some engines even play more than one chess variant. The variant of chess the engine plays can influence the board representation you choose to use. Now you see why it's important to clarify that Rustic plays Western Chess. (In the future it may support one variant of Western Chess: Fischer Random Chess, also called Chess960.)

The nice thing is that, if you understand how to implement one variant, you can implement whatever variant you want... but with some variants, you may have problems finding a user interface to use with your engine.

The data structure used by the engine to track the location of the pieces and other information about the ongoing game is called the board representation. It can be constructed in many different ways. The most obvious and intuitive would be to just give every piece its own number, and put all of them in an 8x8 array, like this (in pseudo-code):

This is easy to understand and it will work. Lots of board representations have been devised in the last 60 years. See the page about Board Representation on the Chess Programming Wiki for more information.

In Rustic the choice has been made to use the bitboard approach (CPW page). In the beginning this is somewhat harder to understand compared to the array approach mentioned above, but once you get the hang of it this representation becomes very natural to work with. Also, current-day computers are 64-bit, and a (Western!) chess board has 64 sqaures... this seems a match made in heaven.

Now that you know what a board representation is and why we need it, we can start looking into how Rustic tackles this part of the chess engine.

Well... after you made sure you thoroughly understand the binary system and bitwise operations Last chance to study these topics before you're going to need them. A lot. Don't say I didn't warn you. I did: in the second prerequisite.)

The next chapter will explain how bitboards work and how the board representation is organized.