To be able to play chess properly, the engine has to be able to detect draws. In addition, to fully support the XBoard protocol (see the chapter about communication), it has to be able to claim these draws. This chapter describes how to use the board representation to detect them. The functions listed in this chapter can be found in the file draws.rs in the Board-module.

The FIDE Handbook of the Laws of Chess can be downloaded here: download (FIDE-site)

This is stated as follows:

The game is drawn, upon a correct claim by a player having the move, if:

And important part in this rule is "by each player": both players have to make 50 moves without a capture or a pawn move for a draw to be claimed. Many people stop playing after 50 moves in total, which would thus be 25 moves by each player. This is incorrect.

The board keeps a game state, which contains the so-called "half-move clock". This is a counter, which counts the number of ply's (a "ply" is one move by one player) that have been played without capturing a piece or moving a pawn. As soon as a piece is captured or a pawn is moved, this counter is reset to 0. Therefore a draw can be reported very easily:

MAX_MOVE_RULE is set to 100, because each player has to play 50 moves, which is 100 ply in total. When this function is called it returns true if the game, at that point, is drawn by the fifty move rule.

This rule is one of the more extensive draw rules, stated as follows:

The game is drawn upon a correct claim by the player having the move, when the same position, for at least the third time (not necessarily by a repetition of moves):

a. is about to appear, if he first writes his move on his scoresheet and declares to the arbiter his intention to make this move, or...

b. has just appeared, and the player claiming the draw has the move.

Positions as in (a) and (b) are considered the same, if the same player has the move, pieces of the same kind and colour occupy the same squares, and the possible moves of all the pieces of both players are the same. Positions are not the same if a pawn that could have been captured en passant can no longer be captured in this manner. When a king or a rook is forced to move, it will lose its castling rights, if any, only after it is moved.

To be able to follow this rule, the engine has to have Zobrist hashing implemented already, so positioins can be uniquely identified. Everything in the position has to be the same. This includes "available moves", "player to move", "en passant", and "castling rights" as mentioned above.

Example: if the white king could castle in a certain position, then moves one square from E1 to D1 and back again from D1 to E1, a position may be reached that looks the same. It isn't, because the white king has lost its castling rights, so the moves available to the white player are not the same anymore. The Zobrist-keys take this and other nuances into account.

To determine if the game is a draw, we walk through this history array backwards. Each time we encounter the same Zobrist-key as the one we have for the current position, we increment a counter.

We can stop searching for repetitions as soon as we encounter a pawn move or a piece capture, because such a move irrevocably changes the position. Therefore our current position can never have been on the board before this point.

This is the function:

We can claim a draw by threefold repetition if this function returns at least 2: the current board position has been encountered twice before, so the one we have on the board right now is the third repetition.

Note: If you are only implementing the UCI protocol, then you can omit this function. It is only needed for the XBoard protocol to be able to claim draw by insufficient material under the FIDE rules. The engine also has a function called sufficient_material_to_force_checkmate(), which is used while searching and can score drawn positions, which is sufficient for UCI.

There is a rule in chess which is often misunderstood: draw by insufficient material. It seems simple: if none of the players have enough material on the board to checkmate the king, a draw can be claimed. However, this is not exactly what handbook says. The relevant rule is as follows:

The game is drawn when a position has arisen in which neither player can checkmate the opponent’s king with any series of legal moves.

This is slightly different from the commonly held belief of "not having enough material to checkmate the enemy king can be claimed as a draw." If you have a King+Bishop vs. King, then the position is a draw, because no player can checkmate the other using any series of legal moves. What about King+Bishop vs. King+Bishop, or King+Knight vs. King+Knight? These positions should be drawn, because no player can achieve a mate, right? Wrong... 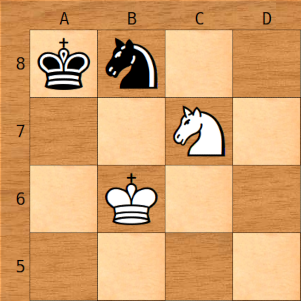 Foul play! I hear you cry. Black must have assisted white in achieving these mates, because they cannot be forced! True enough: these mates cannot be forced. Black must assist white by blocking his own king with his last move, so white can deliver mate. However, these positions are achievable through a series of legal moves. This means that a player can not claim a draw on the basis of insufficient material. Of course, both players can agree on a draw because they both know that the other will not assist in getting mated. Even if one of the players refuses to agree on a draw, the game will eventually run into the 50-move rule and be drawn anyway.

Because of the above, the function which implements this rule (draw_by_insufficient_material_rule()) is different from the function used during searching (sufficient_material_to_force_checkmate()). This function determines if it is legal, according to the rules of chess, to claim a draw and end the game. The function used during searching determines if one of the players is still able to force a checkmate, and if not, to score the position as a draw.

Note that no mate can ever be achieved in a King+Bishop vs. King+Bishop position, if both bishops are on squares of the same color. Any position with that material is therefore claimable as a draw.

The function implementing this rule is fairly simple. It just lists all the positions in which a draw by insufficient material can be claimed: